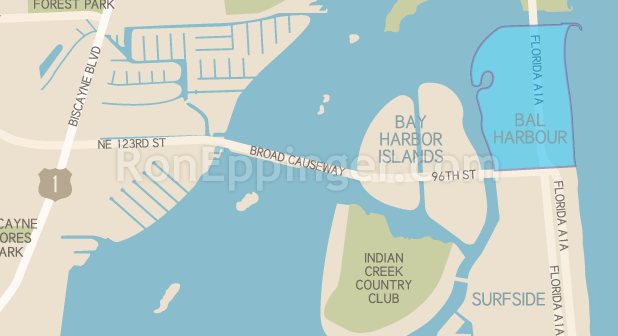 Bal Harbour is a small seaside community with a mix of luxury and ultra luxury high-rise residences that line the east side (ocean-side) of Collins Avenue. More affordable, low-rise garden apartments line the west side of Collins Avenue. The town of Bal Harbour is immaculately landscaped with hundreds of palm trees standing like sentinels on either side of its main street. Bal Harbour is also home to one of the country’s most popular luxury malls with Neiman Marcus and Saks Fifth Avenue as the anchor tenants and fine dining restaurants like Makoto and Carpaccio, both favored by locals.

The town installed a beautiful walking path along the ocean, which is hidden from the street. The ocean views from the path are uncluttered, and the shaded landscaping along the path keeps pedestrians out of direct sunlight. The path leads up to the inlet where boats enter the ocean from the bay. This path is very safe in the daytime and at night. Security in Bal Barbour is very strong with many police and security constantly patrolling the area.

Bay Harbour is the next small town just west of Bal Harbour. The community has a main street with offices, restaurants and shops. One of the most famous restaurants is the Palms, whose Los Angeles location is popular with many celebrities. Bay Harbour has a mixed neighborhood with luxury waterfront homes, non-waterfront homes, mid-rise apartments and garden apartments.

The Location. Bal Harbour is located on Collins Avenue, the coastal road, just south ofSunny Islesand north of Surfside. Bay Harbor is connected by a small bridge just west Bal Harbour. Both Bal Harbour and Bay Harbour are a 20-minute drive from South Beachand the many entertainment districts of Miami. Miami International and Fort Lauderdale International Airports are less than a thirty minutes away by car.

The Real Estate in Bal Halbour Affordable luxury garden apartments are available on the west side of Collins Avenue. These row apartments, mostly built in the 1960’s and 70's, are very well maintained. The apartments are mostly available as a co-ops. Co-ops became popular in the 50's, 60's and 70's as a means to keep the property taxes low for fixed-income retirees. In a co-op structure unit owners own shares of their units as well as a percentage of the common areas. These structures are difficult to finance, which usually reflects a lower purchase price than a traditional condo, but they can be a good value. Bal Harbour co-ops range from $100,000 to $400,000.

Luxury condos make up most of the property inventory on the east side, or the ocean-facing side, of Collins Avenue. Most of these buildings were constructed in the 60's, 70's and 80's, but were introduced as luxury when they were built. Oceanfront and ocean-view units in the older buildings cost significantly less than units with similar views in the newer residential towers.

Ultra luxury residences are now being built on what’s left of the scarce beachfront property. The Saint Regis residences was built during the last building cycle which ended in a market correction, but the project kept building and sold out reaching the highest price per square foot amount in the area. This set the neighborhood’s real-estate bar much higher. Many buyers not only paid a premium price for the ultra luxury resort property, but many bought two and three units and combined them and, in addition, spent millions on interior design and furnishings. The Saint Regis is reserved for the very wealthy.

If you're looking for a property in Bal Harbour for sale or for rent try using the search box below and get current, up-to-the minute listings. Contact Ron 954 520 2731.
BAL HARBOUR NEWS & INFO

Miami's Bal Harbour and Bay Harbour communities offer a diverse range of real estate, including bay-front homes, non-waterfront homes, garden apartments, coops and luxury apartments. This area is also now home to the ultra luxury oceanfront resort properties, such as the Saint Regis. Bal Harbour is a seaside community that offers some of the best shopping for ultra-luxury brands as well as fine dining. Both Bal and Bay Harbour have very good security and offer parks, retail shops and many good restaurants. Contact the Ron Eppinger Team for your real estate needs 786 471 8189.