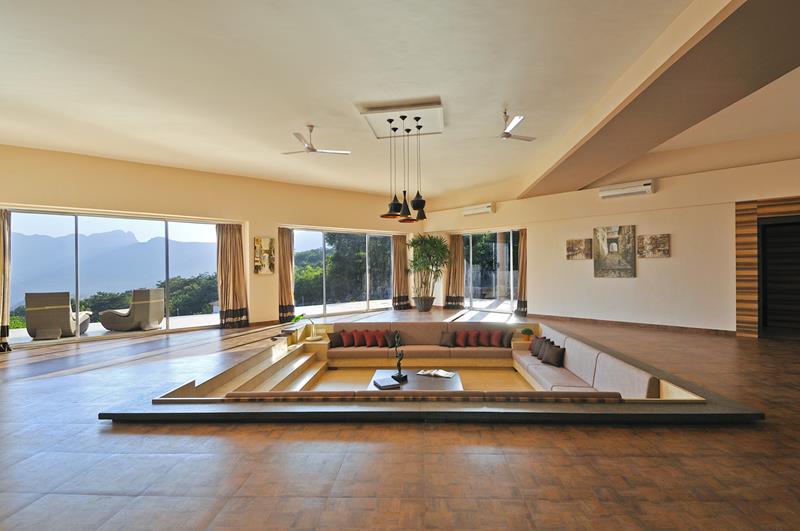 1957, the Finnish-American architect Eero Saarinen designed a home in Columbus, Indiana, for the industrialist J. Irwin Miller that included a peculiar feature. In the middle of the wide-open modernist living room, painted pristine white, was a square depression lined with bright-red couch seating, pink carpeting, and patterned pillows by designer Alexander Girard. A few open steps led down into the cavity, and in the center of the square stood a glass coffee table and perches for ashtrays or cocktail glasses.

This was an early example of the conversation pit, a shallow divot in the floor of a residential home, usually square or circular, filled with plush cushions and shag rugs. The conversation pit trend had already become infamous by 1963, when Time magazine published a short piece called “Fall of the Pit,” contending that its heyday was already over. The piece described the conversation pit’s numerous faults and awkward perils:

At cocktail parties, late-staying guests tended to fall in. Those in the pit found themselves bombarded with bits of hors d'oeuvres from up above, looked out on a field of trouser cuffs, ankles and shoes. Ladies shied away from the edges, fearing up-skirt exposure. Bars or fencing of sorts had to be constructed to keep dogs and children from daily concussions.

Time suggested that those unfortunate owners of conversation pits should simply fill them with concrete and lay floorboards on top—“No one will ever know what once lay beneath.”

But today conversation pits are objects of fascination, relics of a time when living space was oriented not around a wall-sized flat screen and portable computers, but around looking at and socializing with other human beings in real life. If we want to get back to some actual face-to-face time, what better way to do it than in a cushioned burrow designed to host an intimate gathering?

The conversation pit’s roots run deep. It’s reminiscent of any number of social gathering spots in the history of domestic design, from the ancient Chinese kang, a communal platform seating area and bed heated by flume to stay warm throughout the day and night, to the Spanish estrado, a raised dais covered in rugs and cushions that was influenced by the Muslim presence in the medieval Convivenciaera. These pieces of furniture and centralized room layouts could efficiently accommodate large groups, as long as no one had expectations of sitting solo.

Thanks to designers like Saarinen and Paul Rudolph, who was close friends with Charles and Ray Eames, sunken couches have now become a symbol of the kind of midcentury cool that has obsessed us over the past decade. But today they’re a little looser, shaggier, and more bohemian: the buttoned-up 1950s bentwood aesthetic transitioning into late-’60s hallucinogenics (experienced while reclining) and salacious ’70s key parties.

Over time, media has reinforced the connection between conversation pits and cool. In the film version of the Beatles’s Help!, John Lennon curls up in a sunken bed in the midst of a brown-carpeted apartment living room, complete with an arc lamp. John Lautner’s Sheats-Goldstein House, featured in The Big Lebowski as the abode of the wealthy hustler Jackie Treehorn, boasts a seating area of angular built-in lounge couches likely inspired by Frank Lloyd Wright, Lautner’s mentor. Don Draper’s Manhattan apartment in Mad Men (circa 1966, actually a stage set) features a sunken living room with a long wraparound couch and thick carpeting.

It’s easy to forget that curved couches were once the height of progressive design, as dated as they look now. In his 1977 book Lifespace: A New Approach to Modern Home Design, the late New York designer and decorator Spiros Zakas outlines his own approach, which resulted in a bevy of curved couches, upholstered walls, and cozy communal spaces. “We tend to latch onto makeshift images: the homey image, the swinger image, the young married image,” Zakas writes. “The styles created for those images are largely in poor taste … because there’s no purpose or sense to them. Taste can be whimsical but not inane.”

For Zakas, it was far more purposeful to abandon the staid living-room layout of a single couch facing a coffee table and swap it for the “liberated,” as he called it, design of a curved banquette or a couch positioned diagonally through the middle of a room. The arrangements he sketches in the Lifespace book resemble musical notation more than architectural diagrams.

Zakas appreciated sunken living rooms; in fact, a single couch in a straight line was a design sin. The arrangements seemed timeless to the designer, who believed that there was no point in chasing the vagaries of decorating fads. Zakas had utter confidence in his furniture even as he was aware that lifestyles always change. “The Gucci-Pucci world of status symbols is full of people who can’t even have fun unless they’re doing the in thing,” he writes, in the delightfully snarky tone of the committed aesthete. “Couples who ten years ago skied and served Scotch now play tennis and take cocaine”—presumably in their conversation pits.

Perhaps this, too, is part of the furniture’s appeal: to imagine the parties and the lifestyle that the vintage conversation pits played host to. Rather than sitting and watching Netflix, the enclosed pit meant that visitors watched each other. The people near and across from you were the entertainment, ringed around the fireplace or capacious table that often provided the pit’s center. Some of the more wholesome images, drawn from ads or interior decorating books, depict entire families lounging around a sunken couch, playing board games and strumming guitars.

“Perhaps this, too, is part of the furniture’s appeal: to imagine the parties and the lifestyle that the vintage conversation pits played host to.”

My own grandparents live in a midcentury-style home they built in the 1980s in Rome, New York (no conversation pit, just grouped sofas); my cousin Doug Chayka, now a New York City-based illustrator, recalls working in home renovation upstate as a teenager in the 1990s. “The contractor I worked for was getting a lot of requests for adding these conversation pits recessed into the floor of living rooms, with fireplaces and carpets,” Doug says. “He called them ‘fuck-pits.’ He had done a bunch recently for young couples and was sure that’s what it was all about.”

Of course, they’re still not for everyone. Tara Umbrino, a young lawyer in Virginia, encountered many conversation pits when shopping for a home with her fiancé, who counted them as a total deal breaker. “Every damn house we looked at had a sunken living room,” she says. “I’m a personal injury attorney, so I find them unsafe.”

David Force, an architect in Columbus, Indiana, attended parties as a child at Saarinen’s Miller House, with the bright red conversation pit. He grew up with Irwin Miller’s son William, and went to the house for barbecues, during which Irwin flipped burgers on the grill outside. Force remembers that the Millers didn’t treat their home like a pristine modernist jewel box, though it’s now part of the Indianapolis Museum of Art. Rather, the design suited their everyday lives. “It was not a museum; it was not done to wow everybody,” he says. “It was done because they loved it and lived with it, and that’s what they enjoyed.” The Millers even had the bottom of their Steinway piano painted bright red, just so it would be visible to people seated in the sunken area.

The conversation pit served a social purpose, providing shelter for more private conclaves with guests during the Millers’ epic parties. It also played an aesthetic role by receding from view. “It maintains such clean lines in that room,” Force says. “You can look across the top of the pit out of the windows and across the meadow. If there were normal pieces of furniture poking up there, it wouldn’t be quite the same.”

When Force designed his own home 25 years ago, in a modernist style with floor-to-ceiling glass windows facing the backyard, the Miller House might have been a subconscious inspiration, he says. The living room is sunk down a few steps (he compares it to a hot tub) and there’s a long couch with leather cushions and Alexander Girard pillows along the perimeter. Coffee tables and Eames chairs inhabit the center. “It’s a good place to read. There’s no television in there,” Force says. “If you have a group of people over, it’s a nice place to sit and have a conversation—or a couple of conversations, with a larger group.”

Conversation pits are like any victim of taste: The kitschy, cliché object of one era will get adopted once more by a new generation that never had a chance to get tired of it in the first place. Circular couches are even popping up in startup offices like BuzzFeed and BKM as replacements for boardroom tables, transforming the earlier design vocabulary of leisure into one of labor. Work, after all, is another context in which we still have to be face-to-face. It’s fitting decor for companies that extend day jobs into 24/7 lifestyles.

Lately, conversation pits have been seeing another kind of resurgence as well, in virtual reality rather than physical. Companies like AltspaceVR and Oculus render circular couches in 3D as spaces for collective online interaction. Though all the assembled VR users might be sitting on separate couches in their own homes, unable to see each other’s real faces because of the goggles they’ve strapped on, here they’re together, socializing in a circle.

AltspaceVR’s virtual conversation pit resembles a Saarinen, with low grey cushions, while Oculus’s is more ski chalet, polished wood with a digital fire burning in the middle. Both spaces are set in what look like high-rise towers with walls made of glass, a setting that Hulu’s VR design shares (their version even comes with a Barcelona Chair). The living room of the future looks a lot like the ’70s.